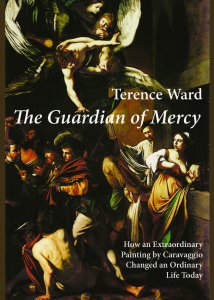 The Guardian of Mercy

How an Extraordinary Painting by Caravaggio Changed an Ordinary Life Today

Tucked inside a tiny church in Naples hangs one of the wonders of Italian art. This altarpiece by the painter Caravaggio offers a radical and fresh take on human solidarity, the cornerstone of all faiths. The unusual true story told in this book unfolds through the eyes of Angelo, who guards the painting as if it were his own. The seven Acts of Mercy was created four hundrede years ago while Caravaggio was fleeing his murder conviction and the dreaded Roman police. It carries a visionary message.

Brimming with suspense, color, and contrast, the narrative follows the painter through a succession of offerings: food for the hungry, water to the thirsty, a roof for those without, clothes for the naked, care for the sick and those behind bars, and burials for the dead.

Ward's personal journey merges with history, memoir, and journalism. With great ease, he moves through the vertical social layers of Naples, past and present, from the most exclusive aristocratic circles to the gritty, crime-ridden quarters of the guardian's world. The arc of this dual narrative - the artist as he feverishly paints his vision, and the guardian's bruised life as it breaks out of darkness into light - transports the reader on a path from estrangement to grace.